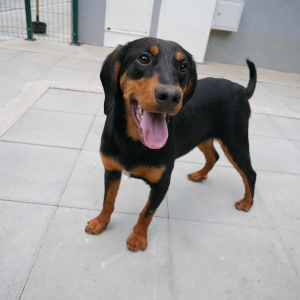 Alfred and his siblings were born in our shelter in November 2021. We rescued their mother Charlotte, who can also be seen in the picture gallery, from the street when she was pregnant. We saw Charlotte lying in front of the entrance of the drugstore DM in November 2021. Two colleagues from our shelter saw that she was pregnant. Charlotte was a very trusting dog, let us pet her and hoped for something to eat. We called our doctors, who immediately left to bring Charlotte to us. After only a few days Charlotte had her 6 puppies. We were so happy that she could give birth to her puppies in safety with us. A short time later, unfortunately, 3 of the 6 puppies died because Charlotte bit too hard while carrying and placing her puppies, and the resulting head injuries to the puppies were so severe that they died. Alfred and his sister Sanja were lucky, nothing happened to them. His brother Bo developed an abscess after his head injury, which had to be surgically removed. Bo is currently still recovering.
Alfred and his sister Sanja are both funny and playful. Since Alfred and his sister were born with us, they don’t know anything except the shelter yet. We are looking for people for both of them who can show them the world step by step with time, patience and calmness.