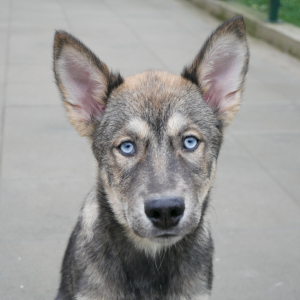 In September 2022 we took Amon, his siblings and his mother Elza into our care. His mother Elza had an owner from her puppy age, who could not keep her anymore due to private and health reasons and gave her away to another family. After a while, he visited Elza to check on her well-being because he heard from neighbors that Elza was wandering around town alone and was on her own most of the time. Upon arriving at the new owners, the previous owner was shocked and very saddened by Elza’s condition. She was completely emaciated and visibly neglected and had also had 5 puppies. So he decided to take Elza and her puppies away from the new owners and brought them to us. Our doctors diagnosed the puppies with parvovirus and immediately started medical treatment. Unfortunately, two female puppies died, Amon and his two brothers Jason and Simon fortunately survived. In the meantime, Amon, his mother and his brothers are alive and well. We hope with all our hearts that all four family members will find great people where they will be cared for and loved and where they can stay forever. Amon is very sweet but a bit insecure and distrustful towards people.