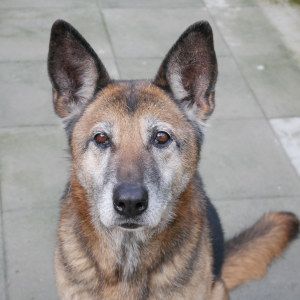 We rescued Asa and another 130 dogs from a local shelter near our shelter and brought them all to us for safety (see News November 2020). Asa and her brother had an owner before they were surrendered to the local shelter. Just before we took the dogs from the horrible shelter, her brother died. Asa and her brother lived with their owner in a village for years. The owner decided to sell his weekend house and give the house and the two dogs to the new owner. Since the new owner did not come to the village regularly, he decided to give the dogs to the local shelter, where they had to spend a very bad time. Asa is now in the group of our older dogs and shares a box with her friend Brock. They have been best friends at our shelter from day one. Asa is a healthy old lady and is calm and gentle. Asa also deserves to spend the rest of her life with a loving family and forget about her life in the shelter.