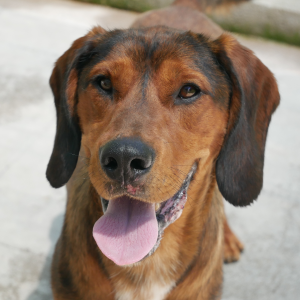 We spotted Bobe in the city in December 2021. He was walking around as if he was lost. We picked him up and brought him to our office, where our doctors saw that Bobe was microchipped. We called the owner and asked about it. He told us that he gave Bobe away to someone and had not heard from or seen him since (several months). We are always shocked by the behavior of people, with what irresponsibility the dogs are treated and we called in the veterinary inspector, who prosecuted the owner of the dog for his behavior. The owner did not deserve to get the dog back and he was not interested in it. We were allowed to keep Bobe with us and are now looking for a family who will treat him with respect and never give him up. Bobe is a sweet, curious and bright dog.