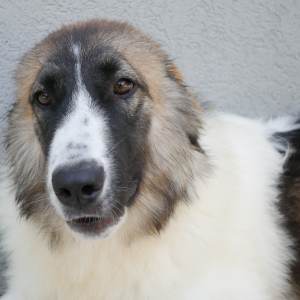 In May 2021, we found Bumbo near our shelter. Based on his behavior, Bumbo appeared to be sick. He was about 5 months old. We brought him to our practice and found that he was infected with parvovirus. Presumably, Bumbo was abandoned by his owners because he was sick. A veterinarian located near us told us that the dog had been in the practice with his owners a few days earlier, but they were not willing to pay for the treatment and therefore decided to abandon him near us. Fortunately, our veterinarians managed to cure him. After his recovery, we brought Bumbo to our Harry, who was similar in size and age to Bumbo. Harry was adopted in Germany in the meantime. Since then Bumbo has been sad and he is now also waiting for a nice home. He is calm and shy.