This is Cura (Bosnian meaning "a girl") 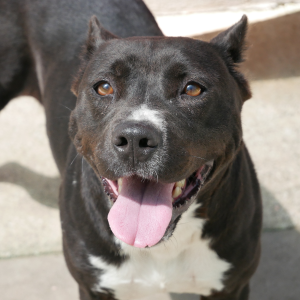 In April 2022 we received a call from the public, they told us about a female dog that was walking around the city looking for food. They told us that she probably put her puppies somewhere. So we went to the city to look for Cura. We found her and gave her some food. After that, we followed her unobtrusively, hoping that she would lead us to her puppies. She ran into an old abandoned building and there we indeed met her 4 puppies. We let Cura nurse her babies in peace and then carefully picked up the family, brought them to our shelter and gave them a quiet and cozy place. When her puppies were no longer dependent on Cura, we were able to separate them. Before we could put the puppies in a puppy group, our doctors examined the four little ones and unfortunately found that they were sick with parvovirus. Two of the puppies unfortunately did not survive the disease and died. Their daughter Ninja and son Stormy fortunately made it. Cura’s ears are unfortunately cropped, so we suspect she had previous owners. Our Cura is very friendly towards people and enjoys petting, towards dogs she often shows her dominance.