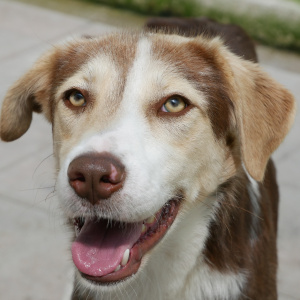 In May 2022 we received a call for Gigi. The caller told us about Gigi, who had looked for a shelter in their garden to give birth to her puppies. She found this place under the staircase to the house. One night in April 2022, her 7 puppies came and the owners of the house took care of Gigi and the puppies, bringing them a fresh blanket every day, giving them food and fresh water. However, after a few weeks, 4 of her puppies died and when the owners of the house noticed this, they called us and asked us for help. We immediately went there and picked up Gigi and her other 3 puppies. It was very important for Gigi to have high quality food and important nutrients to take good care of her puppies. So we gave the family everything that was needed and fortunately we were able to keep them all alive. Gigi’s son Boris and her daughters Fiffy and Fenna, after the critical period was over and they were no longer dependent on their mother, could be placed in a group of our other puppies. Gigi has been spayed in the meantime and is now ready to hopefully go into loving hands very soon. Gigi is a lovely, sweet and charming female.