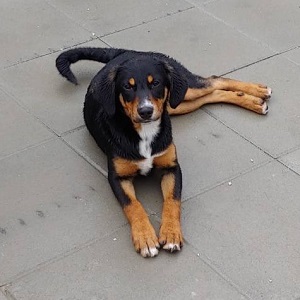 We found Miona and her sister Fiona on the road between Sarajevo and Goražde. They
appeared from the bush and we fell in love with their eyes.  They were 2 months old.  Fiona and Miona are really connected to each other.
They like to play in the sand. Most of the day they are spending time with other four paws friends on the playground. She is really playful and cuddly.