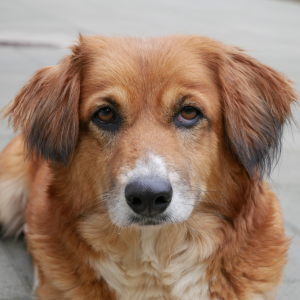 Naomi comes from a local shelter where she had to live in very bad conditions. There she lived with 130 other dogs of different breeds, ages and sizes. We managed to have this shelter closed down and all the dogs brought to us in safety to be able to give all of them the necessary care, medical attention and lots of love (see “News” Nov. 2020). We started medical care and neutering immediately after all the dogs arrived. During the socialization process, Naomi became pregnant. In the middle of April 2021 she had 3 beautiful puppies. However, a few weeks later they became sick, the doctors found out that all of them were sick with the parvovirus, including Naomi. We immediately started therapy, unfortunately two of the puppies died as a result of this aggressive virus. Naomi remained alone with her daughter Nicky. Naomi is charming and cuddly.