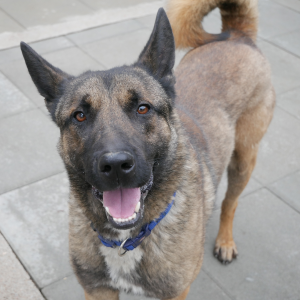 Breed: Belgian Shepherd (written in the Passport)
Gender: Male
Date of birth: November 2019
Height: 59 cm
Weight: 24 kg
In a shelter from: December 2021
Family in the shelter: No Family !

We found Reio in December 2021 in the center of the city near the local gym. He was wandering between the cafes and bars located there and was very friendly to people. Nevertheless, people felt uncomfortable probably because of his breed. We got a call from the public and went in search of him. Reio was standing in front of the gym and came walking towards us in a friendly manner when he saw us. He was wearing a metal collar, we put a leash on him and walked him to our car. In our office, the doctors found out with the testing equipment that Reio was wearing a chip and had an owner. We called his owner and asked about it. The owner told us that he was in the hospital in Sarajevo due to a stroke and that his dog had escaped from his wife’s garden after a few days. He asked us if Reio could stay with us and we could find a new family for him, as he was in such poor health that neither he nor his family could take care of him. They gave us Reio’s passport in which the breed is Belgian Shepherd. Reio was visibly sad in the first days, but later he got used to the new situation. He has his own box and his own area to play. He is a friendly and playful dog and has no problem spending time with people. We are still cautious about pairing him with other dogs. We have two other Belgian Shepherds at our shelter that Reio does not get along well with. However, we will keep at it and try to get him used to other dogs. For our Belgian Shepherds we are looking for people who really have experience and the appropriate necessary time.