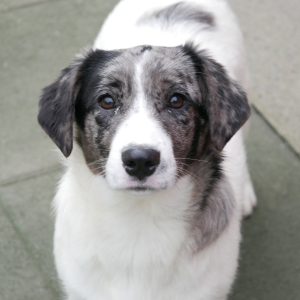 Trudy was born on the street. Her mother Beyonce lived in a suburb of our city near a small school where she gave birth to Trudy and her siblings. Trudy, her brothers Mike (already adopted), Marlon and her sister Babsy were born in July 2021. Local school children wanted to play with them and their mother protected them. In September 2021, we received a call from local people who reported an aggressive female dog attacking children. We immediately went there and explained to the children and parents that the mother is anything but aggressive and she just wants to protect her puppies from strangers. We carefully took Trudy, her siblings and her mother and brought them to us. After Trudy and her siblings were no longer dependent on their mother, we placed them in a puppy group where they have been happily romping around ever since. Trudy and her siblings are happy and silly, as puppies are.