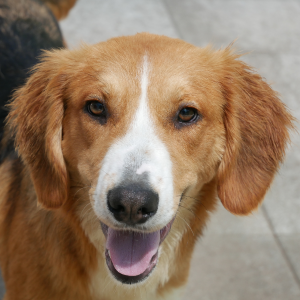 We found Wita and her siblings Thor, Thaz and Wega in March 2022 near a hiking trail of the Drina River. One of our doctors saw them one weekend when he went for a walk with his family one afternoon. He went to them and gave them something to eat and hoped that the mother would show up. He repeated the feeding several days as a result, but the mother of the puppies did not show up. A few days later, a woman approached our doctor and told him that someone had brought the puppies there and put them down, the mother was not there. So we decided to bring all the puppies to us. When they arrived at our home, our doctors examined the puppies and, fortunately, found that all of them were healthy and lively. Since then they spend their time in a group with other dogs of the same age. Wita and her brother Thor are playful and curious, Thaz and Wega have quiet and shy character traits.